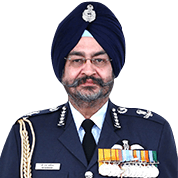 Air Chief Marshal B. S. Dhanoa (Retd.), is an alumnus of St. George's College, Mussoorie, where he studied from 1968 to 1969. Thereafter, he moved to Rashtriya Indian Military College, Dehradun in August 1969 and joined the National Defence Academy (NDA) in June 1974. He later graduated from the Jawaharlal Nehru University in 1977. Post his flying training, he was commissioned in the Fighter Stream of the Indian Air Force in June 1978. In 1985, he carried out the All Purpose Flying Instructors Course (APFIC) and then attained the highest-Flying Instructor's Category A2 in 1987. He then did his M. Sc. in Defence Studies from Madras University and attended a Defence Services Staff College Course in 1990-91. He has an illustrious career with Indian Air Force and has served at various ranks. He served as the Air Officer Commanding-in-Chief of South Western Air Command before taking over as the Vice Chief of Air Staff (VCAS) in May 2015. He served as the 25th Chief of the Indian Air Force (IAF) from January 1, 2017 to September 30, 2019 and led the IAF when it executed air strikes over Balakot in Pakistan in February 2019. He has been awarded with the Param Vishisht Seva Medal in 2016, Ati Vishisht Seva Medal in 2015, Yudh Seva Medal 1999 and Vayu Sena Medal in 1999. Amongst various other achievements, the Fighter Squadron he commanded was the most decorated Air Force unit during the Kargil conflict due to his excellent leadership.

AIR CHIEF MARSHAL B. S. DHANOA (RETD.) IS ALSO ON THE BOARD OF THE FOLLOWING COMPANIES: