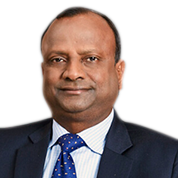 Mr. Rajnish Kumar is former chairman of State Bank of India. He completed his three-year term as chairman of SBI in October 2020. He is credited with steering the bank successfully through very challenging times and adopting key technology transformations. During his tenure, the Bank developed YONO, a digital platform, which established SBI as a global leader in the adoption of technology and innovation. Mr. Kumar is a career banker with nearly four decades of service with the State Bank of India. His expertise in corporate credit and project finance is well recognised. He currently serves as an Independent Director on the Boards of many other prestigious companies viz. HSBC, Asia Pacific, L&T Infotech and is also the Non-Executive Chairman of Resilient Innovations P Ltd. (BharatPe). Mr. Rajnish Kumar was also the Chairman of SBI’s subsidiaries, some of the more important ones included, SBI Life Insurance Company Limited, SBI Foundation, SBI Capital Markets Limited and SBI Cards & Payments Services Limited. He also served as Director on the boards of various organizations, viz. Export‐Import Bank of India, Institute of Banking Personnel Selection, National Institute of Bank Management, Pune, Indian Banks’ Association, Khadi & Village Industries Commission, Indian Institute of Banking & Finance, among others. He has done M.Sc. in Physics from Meerut University and is also a Certified Associate of Indian Institute of Bankers (CAIIB).

MR. RAJNISH KUMAR IS ALSO ON THE BOARD OF THE FOLLOWING COMPANIES: